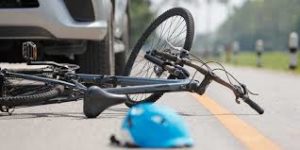 Thankfully, many Ontarians have made the green and healthy choice, riding their bicycle to work, or the coffee shop or for pleasure.  Regretfully, with more riders on the road, there has been an increase in car and bike collisions. Most accidents happen at intersections where cars and cyclists cross paths.  Many of our city and rural streets in the Greater Toronto Area and throughout Ontario do not have designated bike lanes putting cyclists at risk of being struck. Beyond this, other factor can also pose a threat to cyclists including unsafe bike lanes, congested roadways, public transit, potholes and of course, harsh weather.  These dangers can have deadly consequences for cyclists.

Under the Highway Traffic Act, cyclists are typically treated as pedestrians meaning they are presumed to have the right-of-way.  However as a cyclist, being safe is much more important than being correct, as nearly every bike accident results in the cyclist being seriously injured.

What are your Rights?

Cyclists injured as a result of the negligence or fault of another motor vehicle have the right to sue the driver who caused the accident.  The injured cyclist would also be entitled to claim though Statutory Accident Benefits either though their own insurance carrier or if they did not have automobile insurance though their own policy (or of someone they are dependant on), than through the policy of the at fault driver.  These benefits will cover items such as lost wages, medical rehabilitation and other benefits. Click here for more information.

You can seek compensation for damages such as pain and suffering, loss of enjoyment of life, loss of income, medical costs, care costs and other expenses. Even if the at-fault driver did not have valid insurance, fled the scene or was driving a stolen vehicle – you may still be covered by an insurance policy or otherwise.

Contact Pranzitelli Law Firm to Assist with your Bicycle Accident

In most motor vehicle accidents involving a cyclist, it is often the cyclist who suffers the most.

When a person is knocked off a bike, run over by a car, doored or crashed into, it often results in severe and sometimes catastrophic injuries.

If you have been involved in a bike accident, contact us Pranzitelli Law right away for a no-obligation consultation.

We can assist you with a wide variety of personal injury incidents including Motor Vehicle Accidents, Hit And Run Accidents, Slip And Falls, Pedestrian Accidents and much more!

Need assistance with a lawsuit regarding former or present employer? Let our experts assist you through the entire process from start to finish! Contact us today for a free consultation.

What Our Clients Say About Our Services

Our lawyers will also represent you in civil litigation cases such as divorce, child and spouse maintenance.

I commend Mr. Pranzitelli on his ability to strive for client needs while maintaining a professional & nurturing environment. Mr. Pranzitelli's diligence, expertise and continued willingness allow you to feel confident in his care. His genuine care and humility towards his clients allows you to feel safe and encourages a positive outcome.

Finding a personal injury firm conveniently located in Woodbridge was also great for me. Pranzitelli Law got me a great result and I was more grateful in how easy they made the process for me. If you have had a personal injury, don't hesitate to call them, i'm sure you will be as happy as I was.

I am so glad that I found Pranzitelli law following my car accident. It was a terrifying experience and I didn't know where to turn or what to do next. I had so many questions and concerns. I felt so comfortable at Pranzitelli Law. Adriano and his staff always welcomed my questions and I was able to deal directly with my lawyer Adriano at all times.

Our lawyers can represent you in a wide variety of cases to make your life more comfortable.

what we are best at

Read our expertly written blog or follow us on social media

Read our blog to learn about recent cases which may assist you with your situation. We update our blog regularly to ensure you have the most up to date information on cases relating to your sitaution.

Get In Touch
Translate »